The perks of an Online Content Manager are few and far between.

Attending motorshows and the odd driving day are certainly better than nothing however. Good thing too as reading about the automotive journos’ seemingly endless weeks of testing vehicular exotica breeds envy.

It was one such driving day in July 2011 which saw me actually get to sample the latest and greatest cars on sale. It was a rather workshy week after attending Wimbledon (aka my summer home) for the fifth year – such a special place that never loses it’s magic.

Naturally I was running late and only scraped through at Paddington with minutes to spare, my colleagues waiting anxiously, tickets in hand and coffee cups now tellingly empty.

If my Sales Manager Danny and Headline Groups MD Anna were annoyed they didn’t show it and off we travelled towards Castle Combe, (more) coffee’s and bagels in hand swapping stories of holidays, cars (naturally) and the masticating habits of relatives.

An hour and a bit later and we arrived at the circuit. After saying our hellos to various PR chums and sitting through the safety debrief for track driving (despite none of the headline team actually making out onto track that day) it was time to be taken for a spin in a Kia c’eed round the circuit.

It’s fair to say that nothing quite prepares you for a racing lap, being hurled into corners at little under 70mph isn’t something I will forget in a hurry.

We staggered out giddy with excitement but as green as your everyday Mazda2. It was time to be let loose on the surrounding national speed limit b-roads with our pick of a whole host of machinery.

Whilst Anna jumped into an Infiniti M37, myself and the equally nervy Danny decided to share a drive in a turquoise Vauxhall Astra Sports Tourer. We were both tentative at first (and naturally I managed to get us lost within a few minutes), but by the end of our respective stints our confidence grew and the Astra was allowed to stretch its legs.

Cocky enough to go it alone I left Danny to join the queues for keys as I headed for Citroen’s DS3, a special edition no less – designed by fashionista Orla Keily and subsequently shrouded in a sort of camouflage design with lots of lovely bespoke styling inside and out.

Despite the heavens opening up as I approached the little slice of chic I decided to throw it around a bit after a recommendation from a Mazda chum that it is ‘a nippy little thing’. So it proved as the Citroen whizzed along quite stylishly.

The thrills of the car in the wet were matched by the very sudden realisation that I had been let loose alone with the thing, having only passed my driving test less than a year ago. The DS3 is a car that unlike the less forgiving torquey Astra encourages you to push it more. Even with me at the helm, the downpour caused no worries for the LED laden luvvie.

Back at base and after a cheeky bacon buttie and coffee I seized the keys to an Audi A5 cabriolet. The rain had eased a little but not enough to go topless. However the Audi – along with Alfa Romeo’s new Giulietta – were in high demand all day and easily the most popular of the 40-strong fleet among the fifty or so attendees so I went anyway with the roof up.

Once I’d worked out how to start the bloody thing I was away and loving my brief jaunt in the super slick premium soft-top. The interior, unlike the classy but functional Astra or the polished but feminine Citroen oozed an understated elegance.

The car too purred along the slowly drying roads with a sensual whisper, a coax of acceleration and off I sped, serenely.

Such was the elevated price of the A5 that I was perhaps a little too cautious however and once the rain worsened I re-routed back to the track to park her safely away from my inexperienced advances.

Next up, a car much maligned but which I have a real soft spot for and, if I had the disposable income would seriously consider buying over all other cars I tested that day (I didn’t get to drive the Alfa).

Honda’s CR-Z has the looks of a super-quick sports coupe. The futuristic wedge shape and gloriously Tron-esque interior sealed its fate in my and many onlookers affections. However, those looks are a bit deceiving for, as the car is a sports hybrid its performance figures are a little more akin to a Civic than a Scirocco.

But, with the rain at its heaviest all day, it was the accessibility of the Honda that I so enjoyed. A sporty growl met every tap of the pedal yet the car always felt stable and was eager to please in the lower gears, the changing of which was super smooth and satisfying.

In short, the CR-Z was great great fun to drive, I was able to ignore the rain (which was still terrifyingly heavy) and lock myself within the dark, comfy cabin illuminated in a bright blue hue thanks to thatdashboard display.

It was just me and the Honda, instant torque and nimble handling. I did have one gripe however – rear visibility was poor. 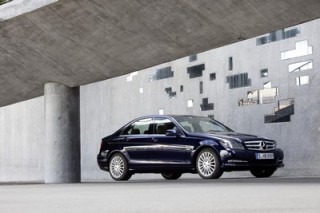 Brimming with confidence after the Honda I foolishly selected a Mercedes C350 saloon. The car costs nearly 40k and there I was, swallowed up in cream leather sheepishly crawling from the entrance of Castle Combe out again onto the public roads. With Wimbledon blaring out of the radio (Serena in trouble) and the rain lashing down I tasted my first bit of V6 power.

The power caused me to laugh uncontrollably as I surged forward onto the open road, probably doing something ridiculous like 45 mph but in this beast even that felt special. Suddenly I imagined myself on that BBC ‘entertainment show’ and started spurting out Clarksonisms before giving the Merc the beans once more, stopping only to turn round (needing an excuse to use the rear-view video camera upon the media console).

Alas my joy turned to blind panic as I was nearing the entrance to castle Combe again I realised I had no idea where the indicators were. With cars streaming past on both sides of the road I didn’t want to risk a lunge across the opposing lane without a hint of a signal.

So I continued, for another ten minutes or so, rain still lashing down and me frantically flicking every switch and prodding every button desperate for the comforting tick tick sound of victory.

After a mildly petrifying roundabout excursion (5th exit with no indicators, in somebody else’s expensive saloon) I found the blessed blinkers and returned shaking. 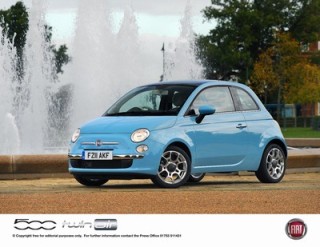 Another coffee to calm the nerves and fittingly, as the sun finally broke out I chose the Fiat 500 Twin Air for my final drive.

My plan –echoed in my choice – was to tone things down and have a relaxing pootle around, but the Fiat 500 – as some of my friends who own them will attest – is too much fun to do this in.

A dry(ish) road was all the excuse I needed to hurtle down the country lanes at silly speeds, I should’ve been more cautious but, even more so than the DS3 the Fiat felt assured at high speeds, it craved no, demanded them that day.

As well as MINI-beating interior chic, the Fiat has excellent visibility, which only added to the carefree attitude. In short, it was a blast to drive and in its own revvy and deceptively rapid way the Fiat almost rivalled the CR-Z as my favourite. Almost.

Roll on June 28th, where I’ll be unleashed once more at Castle Combe, aims this time round include the Porsche run on the track, and hopefully get inside that Alfa!