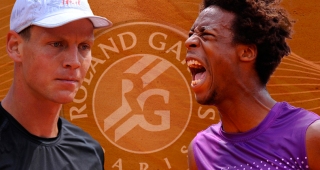 A seemingly never ending schedule of work with no rest or play sees the second major of 2013 a little neglected on my disgrace of a blog. Apologies, but unlike yours truly, the Parisian Slam hasn’t disappointed in the drama stakes. Even if shocks and surprises have, on the surface at least, been thin on the ground.

Having visited the tournament for the past two years I’ll freely admit to some gloating over the bad weather in the French capital this week, much to a certain Spaniard’s outrage, more on him later.

There have been some titanic battles out on the red stuff this week, and from them, some major upsets and week one darlings, in both the men and women’s competitions.

But where does the title-contending momentum lie? Normally we wouldn’t look past His Royal Clayness Rafa, whose impeccable record here has continued this week after that lengthy layoff last year. But there have been signs in all of the defending champion’s matches so far that things aren’t as effortless as before, and it isn’t an injury issue; at least to my layman’s eyes.

Against journeyman German Daniel Brands in the first round it was definitely Rosol Syndrome for Rafa – his opponent playing the match of his life and subsequently proving unplayable. Everything hit early and like a rocket, with precision and perfect timing. At 4-6, and 0-3 down in the second set tiebreak it looked more than worrying, but Nadal’s class and experience shone through as his opponent failed to keep up his superhuman levels. 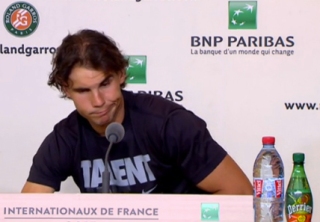 Similar scenes against Fabio Fognini too in the third round and another dropped set in his rain-delayed second round too. Nadal has, by his own standards struggled this week.

Elsewhere it couldn’t be more different, Djokovic and Federer have breezed through, but this matters less so on this surface, a clay court specialist can still cause these two problems if they arent firing on all or most cylinders.

In any case the Rafa/Djokovic semi-final will be the Big One if they make it there.

Again it is widely seen as a safe bet for Serena to lift the trophy again for the first time in more than a decade, such has been her dominance of the women’s game since that shock opening round exit here to Virginie Razzano twelve months ago.

But it is precisely that ten-year drought of RG titles that should worry Williams fans, it is not her surface and things have been far from rosy with the French contingent in years gone by. Yet, such has been the American’s total devastation of her often higher-ranked rivals this last year that she could just as easily blow everyone of the court – as she has been doing this week – once more.

Defending champion Masha looks solid too however, and Sara Errani is more than holding her own this year when she could’ve so easily faded away after 2012’s breakthrough. A fine story for the women’s game and long may her success last.

2010 victor and 2011 runner-up Schiavone looks hot here too, she could go far again but has to get past Azarenka first.

It is going to be an excellent second week with some mouthwatering match-ups starting today: Kuznetsova v Kerber, Williams v Vinci and Simon v Federer to name but three.

A first round shocker as the Czech continues to frustrate his fans. Homegrown favourite Monfils began his mini-resurgence here with a huge win. Hopefully the likeable elasticated underachever can push on from this tournament, even after an equally resurgent Robredo ended proceedings abruptly in Round 3.

2011 champion Li Na has some explaining to do after this, the defeat itself has been accepted by her nation but not her comments in the post-match press conference. The likeable American continues her campaign against fashionista Kirilenko who is now finally producing consistently excellent tennis to match her off-court attentions. One to watch.

Week 1 heroes (starred players are favourites of mine, shamepluss plug)