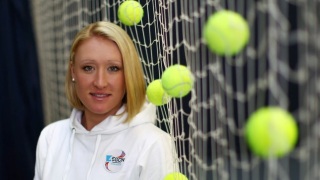 Amid the extremely sad news today of Elena Baltacha losing her fight with liver cancer at just 30 years old – mere months after diagnosis – I offer my own paltry dedication.

The woes of British tennis have long been documented – for while the men were ably represented by Henman, Rusedski (kind of) and of course boosted into the stratosphere by Andy – the women have continued to struggle.

Laura Robson and Heather Watson have made huge waves of course, but before them it was a sorry picture for much of the last two decades.

But one player – to me at least – always remained the exception. I have watched Elena numerous times both on the telly and courtside at Eastbourne, Wimbledon and Roland Garros (along with Hantuchova, she emerged victorious every time I saw her in person), and the spirit and determination she showed was overwhelming.

Her ‘Battling Bally’ monicker was incredibly apt, she never gave up and often gave her more prestigious opponents more than a few scares or at the very least prompted them to step up several gears.

It must be said that watching British players at Wimbledon comes with an air of knowing acceptance that said player will try their all only to succumb. Not with Baltacha, such was her ability to pull a blinder of a backhand down the line from nowhere, the crowds would be shook out of their seats and the belief would roar back into their collective psyche.

A great servicewoman for her country with an excellent Fed Cup record and a fine ambassador for the game, not an easy role in this country which will never embrace tennis like it does football, golf or cricket.